Project Transport specializes in shipping from the U.S. mainland and Canada to Hawaii, Alaska, Guam, and the Pacific Islands. We handle all types of freight, including Less-Than-Container Load (LCL), Full-Container Load (FCL), RORO, Oversized Cargo, Break-Bulk, and Projects. 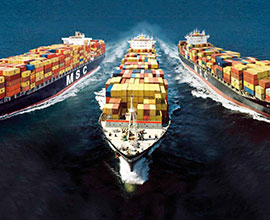 (11/3/2014) The International Longshore and Warehouse Union is engaging in work slowdown actions at the ports of Seattle and Tacoma, waterfront employers say, raising fears that the tactics could spread to Los Angeles-Long Beach, the nation’s largest container gateway. According to the Pacific Maritime Association, which represents shipping lines and terminal operators in contract negotiations with the ILWU, the work slowdowns are directly related to the coastwide negotiations. The ILWU has been working without a contract since July 1. PMA spokesman Wade Gates said that when the previous coastwide contract expired on July 1, both sides stated publicly that they would bargain in good faith and refrain from job actions or employer lockouts because of the economic impact work stoppages and slowdowns would have on the national economy. Now, the ILWU has reneged on that agreement, Gates said Monday. The PMA issued a statement Monday saying the work slowdowns began Friday in Tacoma and spread to Seattle over the weekend. The PMA has found that the slowdowns at these Pacific Northwest ports have resulted in terminal productivity being reduced by an average of 40 to 60 percent, the employers’ organization stated. The ILWU on Monday night said the charges were a ‘bold-faced lie.’ The union accused the PMA of undertaking a ‘media blitz’ aimed at besmirching the ILWU and deflecting blame for LA-LB congestion.

(8/6/2014) Hurricane Iselle and Hurricane Julio are currently on a path headed for the Hawaiian Islands. Iselle is expected to reach Hawaii Thursday night and Julio this weekend. Both hurricanes are expected to weaken to tropical storms prior to reaching the Islands, but will nevertheless result in heavy rains

(5/21/2014) As the union representating West Coast longshore workers and the group speaking for shipping lines and terminal operators begin new contract negotiations, much is at stake! Their objective is to reach a new agreement by the June 30th expiration of their current pact, signed in 2008.

Transglobal Express has been trading for over 20 years. We’ve established a reputation for freight forwarding expertise, great value-for-money services, and exceptional customer care.